Boasting a brain bending 8,000-lumen output from five CREE LEDs, the light has a 32-degree beam spread from the top three flood lights and 21-degree spread from the lower two spotlight LEDs. The Monteer is topped off by a claimed 315m beam throw down the trail. 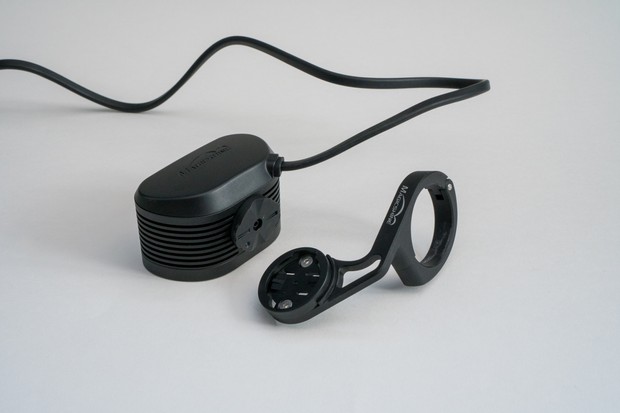 Magicshine says it’s managed to pack this power into such a small package thanks to on-board precision thermal control and an aluminium alloy case with side-facing cooling fins that help dissipate heat. The head unit has also passed a 1-metre drop test and has an IPX5 waterproof rating (to resist a sustained, low-pressure water jet spray).

It has three programmes, each with four constant and one flashing mode, selected with a double push of the single power and mode button on the rear of the head unit, and then cycled through with a single push of the same button.

The button remains illuminated green when the light is on, but turns red when there is between 6 and 20 per cent battery remaining. Once battery life has reduced to 5 per cent or less it flashes red.

The separate battery pack has a three-stage battery life indicator, activated with a push of the integrated button. There’s a USB-C charging and output port, which means the Monteer’s 10,000mAh battery can be used to charge other devices with the correct cable. In full power, the battery lasts a claimed 1-hour 30 minutes. 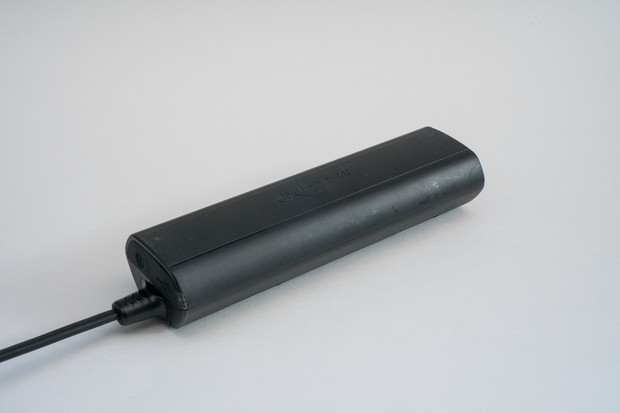 The battery pack is long but fairly thin. Alex Evans

The head unit and battery pack are connected via a 107cm cable and the battery pack is secured using two Velcro straps. The head unit uses a Garmin-style twist-lock attachment to connect to the mount, which positions the light off centre in front of the stem.

The light can be mounted either way up and with a compatible adaptor can be attached to GoPro-style mounts, too. This means it can be used on helmets as well as handlebars. The mount is compatible with 31.8mm and 35mm bars thanks to the included adaptor. 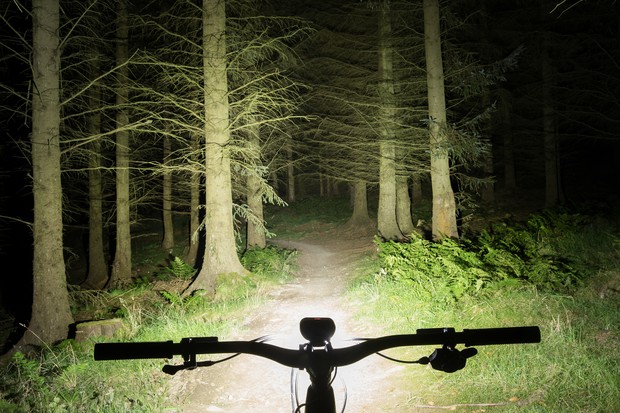 The Monteer 8000S’ immense brightness is second to none. The trail and its surroundings were beautifully lit up with fantastic competence and you’d be hard pressed to want more illumination.

This makes it a one-stop-shop for gnarly trail riding and, unless you want a secondary light, I couldn’t find a scenario on the trails where there wasn’t enough light to confidently and quickly pick lines while tackling tricky descents.

The light’s beam is impressively broad with a virtually imperceptible cut-off point to the sides and front. I never felt like I was looking down the trail without light shining ahead, even around sharp turns. On anything other than an arrow-straight road, it was impossible to see where the beam’s forward cut-off was, so on-trail illumination was never a problem.

And despite the impressive flood light, there was also a bright focal spot directly in front of the bike. This meant it was possible to pick out details like rocks and roots as if it was daytime. This level of definition combined with the contextual information given by the flood LEDs makes the Monteer 8000S very impressive.

The spotlights shine plenty of light downwards, too, so shadows were rarely cast when I went up rises, off drops or over jumps, furthering the confidence the light gave me.

The LEDs had a white hue which helped reduce the contrast that bluer lights can cause. The light wasn’t harsh, was easy to see with and I didn’t have to strain my eyes when looking for trail obstacles. 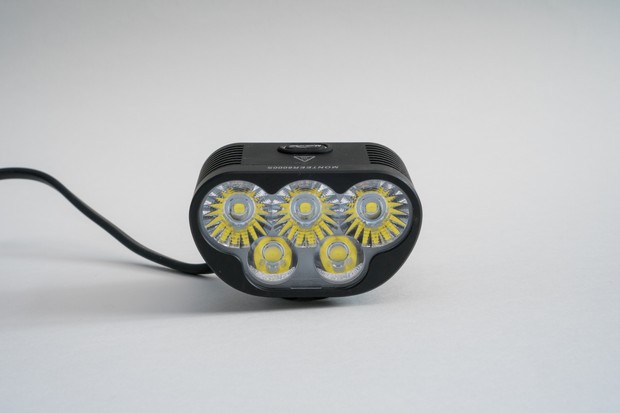 Five LEDs put out 8,000 lumens of power and illuminate the trail like no other light I’ve tested. Alex Evans

I found the single button easy to use on the fly, but didn’t actually change modes very often. Even in the lower power settings, the light didn’t lack output and I only toggled up to the brightest mode when it was really needed.

Run time in the maximum 8,000-lumen brightness was good too, at 1 hour 15 minutes. Because of that, the unit’s lack of battery indicator isn’t as much of a problem as it would be on lights with lower battery capacities, and I just had to run the Monteer on the lower 4,400-lumen setting to nearly double battery life.

Although the lack of mode indicator was frustrating at times, considering the number of outputs on offer, it was always obvious when it was in its brightest, most illuminating setting.

The out-front mount kept the light stable over even the roughest of terrain and the Garmin-style twist-lock attachment was easy to use. And, because the mount put the light directly over the stem, there was plenty of space on the bars for accessories such as GPS units.

The battery’s Velcro straps provided a tight and secure fit, and because the battery is quite thin at 34mm it could squeeze into gaps that bulkier models couldn’t. Its cable was quite long and no dedicated storage straps were provided.

The Monteer 8000S is a true masterpiece, providing incredible power, exceptional beam pattern and ease of use. If you’re looking for one light to cover all night riding bases, look no further, this is it and well worth the $400 / AU$650 price.